The Unimat 09-32/4S Dynamic E³ hybrid universal tamping machine received unlimited approval for operation in Germany in the summer of 2020. This demonstrates the pioneering spirit of the owner, Krebs Gleisbau (based in Bad Kreuznach and Bern), once again: the hybrid machine is the world’s first tamping machine to work and travel on electric power. Now, it is also the first of its kind that has been approved for electric operation not only in Switzerland and Austria, but also in Germany.

Since the machine proved to operate reliably in electric mode, tamping work is no longer reserved for diesel-hydraulic machines only. The EBA also approved fully electrically-powered transit runs in Germany, allowing yet another country to benefit from energy-saving, cost-effective, quiet, and efficient electric operation.

The E3 series hybrid machine was handed over to the German-Swiss company Krebs Gleisbau (founded in 1932) during InnoTrans 2016. Ever since, it has been operating under a ten-year contract concluded with Swiss Federal Railways (SBB), working in every region of the Swiss railway network. The machine ensures high availability, working successfully and reliably. During previous tamping jobs, it was powered electrically for more than 80 % of its operating time.

Analyses have shown that electrical operation results in a remarkable annual reduction in carbon dioxide emissions of around 125 tons; they only consider working-mode data. In Switzerland, train consists are generally used for energy-intensive transfer runs which have considerable savings potential. Hourly operating costs are noticeably lower than when using a comparable, conventional universal tamping machine.

Krebs Gleisbau aims to receive approval for all its machines to operate in networks throughout Germany, Austria, and Switzerland. Therefore, the company has been working specifically towards a universal operating licence. The Unimat 09-32/4S Dynamic E³ can now serve as a reference for the approval process behind future machines employing Plasser & Theurer's E3 technology. Krebs Gleisbau's management decided unanimously: “The next one also has to be an E³ machine.” 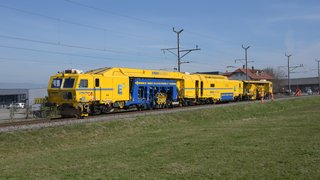 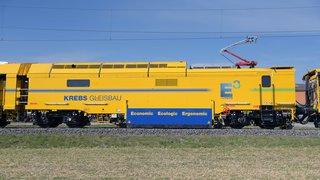 The E³ hybrid drive concept allows the machine to be powered either via a diesel engine or via an electric motor.
descargar (JPG, 10 MB)